Skoda introduced a station-wagon version for the Octavia RS in 2002 and transformed its fastback sedan into a fast family carrier, with one of the biggest trunks in its class.

Since Skoda built the Octavia on the same platform as the Volkswagen Golf, it was easy for the Czech carmaker to drop a sporty drivetrain into the engine bay. All it needed was approval from Volkswagen Group. Thus, in 2001, the Czech brand presented the RS as a five-door fastback and in 2002, the station-wagon.

The Octavia vRS was considered a poor's man GTI. It offered plenty of features for a family and a hot-hatch engine under the hood, and that was noticeable on the car's exterior. The carmaker installed a new front bumper with an apron and a wider grille at the bottom. From its sides, the unique light-alloy wheels design made a clear difference when compared with the rest of the range. On top of the tailgate, Skoda installed a roof-spoiler designed especially for the Octavia RS Combi.

Inside, the carmaker mounted sport bucket-seats with high bolstering to ensure a better grip for the driver and the front passengers during high-speed cornering. Its two-tone interior was unique for the vRS version, and its standard features list was longer than on the regular Octavia. Though, the heated seats and the ESP were on the options list.

Under the hood, Skoda installed a 1.8-liter turbocharged gasoline engine paired as standard to a five-speed manual and sent its power to the front wheels only. Still, the car featured stiffened suspension, bigger brakes, and independent suspension in all corners. 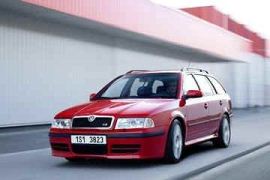