The Saab 9-5 represented Saab's replacement for the 9000 model discontinued in 1997.

The new model was produced in the same year, in two body versions: wagon and sedan. The car was considered a strong rival for the time’s Audi A6, BMW 5 Series or Mercedes-Benz E Class. The SAAB 9-5 had a long 12 years life before being replaced by a newer model.

While both body versions were very spacious inside, the wagon was mostly bought by people who wanted space and an easy loading feature, the car being equipped with a slide out boot floor.

The car was available with 4 engine choices: 2.0-liter and 2.3-liter gasoline, a 3.0-liter V6 gasoline and a 2.2-liter diesel unit. Except for the V6 engine, the others were fitted with a manual transmission. From 2001, the 4-speed automatic was replaced by a 5-speed automatic gearbox.

The V6 engine was later replaced with a 4-cylinder producing 220 hp. Saab upgraded it and by 2006, its power was increased with 40 hp, reaching 260 hp.
The car was well known for its safety features, being equipped with SAHR (Saab’s active head restraints) and the front seats had torso and head airbags, a rare feature for the 90’s.

The 9-5 was also used as a police car in Sweden and the UK, the Aero version being the preferred one due to its powerful engine developing a high torque. The Aero version was able to outperform a contemporary Porsche 911 Turbo between 40 to 90 mph. 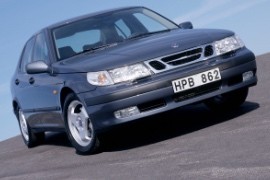 1 1967 Saab Monte Carlo 850 Parked in the Woods Is a Fantastic Find, Sitting for Years

3 This Saab J35 Draken Made the Soviets Think Twice Before Messing With Sweden, Now For Sale