Saab introduced the second generation of the 9-3 lineup in 2002 based on GM's Epsilon platform shared with other European products, and in 2003 it unveiled the open-top version for it.

The Swedish automaker reworked the platform to create the open-top version, and as a result, the 9-3 Convertible shared just a few parts with other GM vehicles, leading to a steep price. Still, the car was highly appreciated by its customers since it offered unique features unseen on other vehicles on the market.

The 9-3 featured a grille that showed a sketched plane viewed from the front, which resembled the company's heritage. Its sharp-looking headlights with corner-mounted turn signals showed the brand's determination to succeed. The thick, racked A-pillars were also used as protection in case of a roll-over crash. From its profile, the 9-3 showed a slightly ascending belt line that ran toward the back of the vehicle. The power-operated canvas roof could've been retracted and completely concealed in a dedicated storage area behind the cabin.

Inside, Saab installed its brand-specific functions, such as the night panel that lit only the speedometer, the ignition placed between the seats, and the high-bolstered seats for the front occupants. Yet, in the back, there was little knee room for rear-seated passengers, but it was just enough for short trips.

Under the hood, the 9-3 Convertible received a wide choice of engines, depending on the market. 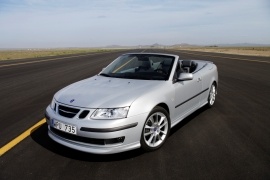