The French carmaker introduced a refreshed version of the Megane's second generation in 2006 for the entire range, including the station wagon.

After a successful first-generation, Renault was ready to get more customers with the Megane sequel on the European market. That's why it tried improving the car in all the areas, and especially on the safety side, where the car got a five-star rating in the EuroNCAP crash tests.

The facelifted version of the Megane Station Wagon got a new front fascia, with body-colored plastic moldings over the bumpers and sides, which were black on the 2003 version. The carmaker installed the same angular headlights that were continued on the same line with the black grille. On the lower side of the front bumper, the carmaker installed round fog lights as standard for the entire range.

The interior showed a new navigation system designed together with TomTom. Its retractable screen on top of the dashboard was unique on the market, at least on the budget car segment. Like its predecessor, it featured a 60/40 split bench in the rear, which increased the trunk size from 520 (18.4 cu-ft) liters to 1,600 liters (56.5 cu-ft).

Under the hood, Renault installed a choice of seven engines, both gasoline, and turbo-diesel. It was available exclusively with a manual gearbox. 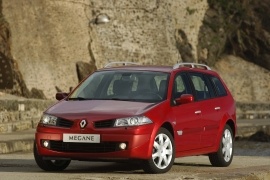