Qoros prepared yet another new model for 2016, the stylish and well-proportioned 5 SUV.

Designed by two teams in Shanghai and Munich, the 2016 Qoros 5 SUV's style isn't too far from the 3 City SUV. The front comes with the same imposing grille. thin headlights with LED technology and a large lower intake guarded by the round foglights. The side profile looks simple and sleek, dominated by large wheel arches and a roof that arches past the C-pillar to end with two flush-mounted stoplights. The interior is pretty similar in style with the one on the 3 models and the engine is a carryover as well. 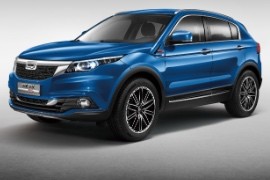