In 2013, Porsche introduced a long-wheelbase option for specific models on specific markets.

After the diesel engines started to be blamed for pretty much everything in the climate change debate, Porsche withdraws its oil-burner vehicles and replaced them with plug-in hybrids. A decision that gave some peace of mind for environmentalists but still offered enough pleasure for its customers.

Porsche Panamera 4S E-Hybrid Executive had a 15 cm (6”) longer wheelbase than the regular Panamera range. It offered a special design to be distinguished from most of the rest of the range. Few new details of the vehicle enhanced the look of the “greener” Panamera. The 4-LED headlights fitted as standard were one of the key design elements that made the car attractive. As a distinctive detail, the 4S E-Hybrid featured the electric-green brake calipers and the green “hybrid” badges on the fenders and the trunk lid. In the back, the revamped light strip ran seamlessly over the trunk lid, with an adapted contour and new LED taillights were installed.

The interior of the Panamera 4S E-Hybrid Executive offered more legroom in the back and more comfortable seats. For the dashboard, it featured the Porsche Communication Management infotainment system with a 12.3” touch-screen display mounted at the same level as the steering wheel, on top of the center stack. Along with the specific hybrid controls, it featured the improved Voice Pilot online voice control and wireless Apple CarPlay as well. Porsche didn't say anything about the Android Auto connectivity. 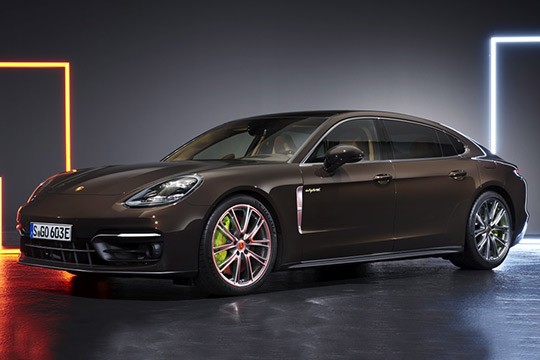