After four years on the market, the 996 generation of the Porsche 911 received a facelift in 2002.

It brought a few options and a new pair of headlights. It was fitted with more powerful engines.

The 2002 Carrera came on the market to attract even more customers. It was already established as a true sports-car and a great grand-tourer vehicle. Its rear-engine and rear-wheel-drive configuration were highly appreciated by its customers.

Inside, the main difference was the stereo, which received a digital AM/FM stereo and a CD-player. Other than that, it was the same four-seat sports car built for two adults for long journeys. In the 911 coupes, the rear seatbacks could have been folded down to create a flat cargo floor. It was a good daily driver vehicle and even more relaxing on long journeys.

The drivetrain received a new 3.6-liter engine and it gained 20 hp more than the non-facelifted version. It was fitted with a standard 6-speed manual. The 5-speed automatic (Tiptronic) gearbox with manual override to change gears was on the options list. 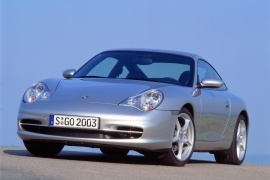 1 2024 Porsche Macan EV Hits the 'Ring Looking Like This, Gets Driven Hard Anyway