5 Here's Your Chance to Purchase the Only Racing MPV in the World, the Peugeot 806 Procar

Based on the 308 RCZ concept announced in 2007 at the Frankfurt Motor Show, the final version of the Peugeot RCZ was unveiled to the public in 2009 in the same place.

The RCZ was a good step forward for Peugeot, as it was hard to name a fun-to-drive car they had produced over the years.

Creating a completely different car, the RCZ was the first car not to have a “0” in its nameplate. Fact that actually meant the new sport-coupe had nothing to do with the other models in the range.

From the front, we could say that the RCZ was similar to the 308.

At the back, things drastically changed with the aggressive design. Rather unusual and easily noticeable from the rear, the RCZ had a double bubble roof and windscreen, features more specific to a concept car. However, Peugeot went far enough to even produce it, despite the increased costs.

Available with a diesel or a choice of several gasoline engines, the most powerful unit developed 200 hp and was mated with a manual transmission.

While you would expect the 200 ponies to provide great power, the performance was rather modest. Yes, the unit was smooth and had a good torque, but fast wasn’t really the adequate word.

Nobody can deny the RCZ’s great look and while the trial was a successful one, there was room for improvement in all aspects. 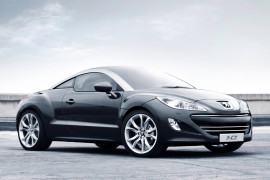