3 Peugeot 508 Getting Nip and Tuck, Facelifted Mid-Size Sedan and Wagon Spied While Testing

4 Stellantis Inks Deal To Source EV Microchips From German Tech Giant, Will It Be Enough?

Back in the mid-'80s, Peugeot introduced the 205 GTi, and the world of hot-hatches changed forever; it was the car that offered the most thrill on the buck.

After that successful model, Peugeot focused more on comfortable cars than on sporty hot-hatches. The 206 GTi and the 207 RC didn't stand at the same level as their ancestor. But the 208 came to reclaim the kingdom of its niche segment with the introduction of the 208 Gti.

First of all, Peugeot tried to show the little car's muscles, which was evident on the front bumper, with its reversed trapezoidal grille surrounded by a chromed rim. On its sides, the carmaker installed a pair of fog-lights in chromed rims. The 208 was available in a few body versions, but the GTi version was exclusively a three-door hatchback. The extended roof-spoiler completed its unique design for the 17" light-alloy wheels and the twin, squared-looking exhaust. To be sure that every bystander would know what was all about the car, the carmaker installed a set of chromed badges with red GTi behind the rear side windows.

But the unique details didn't stop on the exterior. They continued on the inside where Peugeot installed front bucket-seats with high-bolstered areas to support its occupants during high-speed cornering maneuvers. The flat-bottom small steering wheel sported a GTi badge, and the red trims on the instrument cluster and center stack confirmed that it was a particular vehicle.

Under the hood, Peugeot installed a 1.6-liter turbocharged engine that provided 200 hp. The carmaker paired it exclusively to a six-speed manual gearbox. The lowered and stiffened suspension helped the little hot-hatch feel lively on tight corners, and it was the closest Peugeot 205 GTi sibling. Maybe even better. 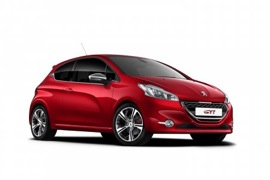