Peugeot had a lot of racing history and many titles on its shelf when it decided to build one of the last naturally aspirated, manual gearbox, light, and nimble cars from its lineup: the 206 RC.

The hot-hatch war was partly moved from the compact-segment to the super-mini. The Renault Clio Renault Sport opened the appetite for it and the next in line that followed was the Peugeot. About the same time, the Honda Civic Type R brought the EP3 version, with its 8000 rpm screaming engine and 200 hp. But that was too expensive, so the Europeans were left to chose between the French brands for naturally aspirated engines. All of the others were turbocharged.

On the outside, the little 206 RC (or GTI 180 as it was named in the U.K.) featured a longer roof-spoiler then the regular 138 hp GTI. In the front, the lower apron was slightly modified to look more aggressive. A new set of 17” light-alloy wheels completed the sporty package. It was available only on the 3-doors bodywork, like its famous ancestor, the 205 GTI.

The interior was more race-inspired than other Peugeot vehicles. The Recaro sport-bucket seats featured a non-adjustable headrest and a hole for a harness, even though there was no race harness installed. But it looked good. The aluminum pedals and gear-stick knob enhanced the “racy” look of the vehicle. The car-maker installed a short-shifter for the 206 RC.

The car's heart was a 2.0-liter naturally aspirated engine with variable valve timing and modified inlet and exhaust manifolds. It was mated to a standard 5-speed gearbox. The four-wheel brake-discs were fitted as standard. 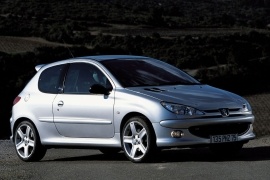