The 206 was an instant hit for the French carmaker, even though its customers were still missing the old 205.

In 2002, the carmaker introduced a mild facelift that increased sales.

Changing a cult-car was never easy for any carmaker. But Peugeot dared to do that when it replaced the 205 with the 106 and the 206. While the former was mostly a city vehicle, the latter proved to be successful as a commuter vehicle, and it faced a huge success among women.

The 2002 facelift was mostly on the technological side. The exterior featured the same feline headlights and black plastic molds on the bumpers and on the sides. These were highly appreciated since they didn't need any repairs after shopping-carts bumps or parking in too-tight spots. Some minor changes appeared on the front bumper and the taillights. Also, depending on the trim level, the car featured body-colored door handles or just plain black.

Inside, the carmaker introduced new materials for specific trim levels and a new design for the instrument cluster. They featured a silver ring around the dials, and that enhanced the driving experience. The carmaker adjusted the pedals to be easily driven by women who wore high-heels. It was a true innovation for any carmaker. While men couldn't find a proper driving position in any aspect, women found it easier.

Under the hood, Peugeot introduced new engines that made the car more fuel-efficient. It offered the 1.4-liter turbodiesel developed together with Ford and adjusted all of its range to the Euro 3 pollution norms. 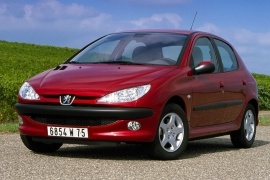