The second generation of the 2008 is Peugeot's way of saying that the French carmaker really means business in the compact crossover segment.

Don't mistake the new Peugeot 2008 for a small SUV though, because it still doesn't come with all-wheel-drive, instead relying on Peugeot's so-called grip control system, which apparently give the car some off-road prowess in certain situations.

Available with either gasoline, diesel and even electric power options, the engine lineup seems rather exhaustive for a French car. On the diesel side, the four-cylinder 1.5-liter turbodiesel is available with either 100 or 130 horsepower, while the gasoline engines are structured around a 3-cylinder, 1.2-liter that can be had with either 100, 130 or 155 horsepower. Most engines are coupled with a manual transmission, but some can be partnered with an 8-speed automatic. The big surprise is the all-electric version, which comes powered by a 136 horsepower motor. Thanks to a 50 kWh battery that is guaranteed for 8 years of 160,000 km for 70% of its charging capacity, the model has a range of up to 310 km according to the new WLTP standard, 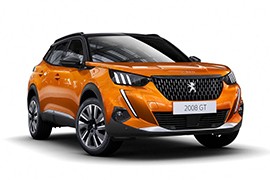