Nissan was a pioneer in electric mobility with the Leaf in 2010.

Before that, a leader in the SUV market with the Qashqai. It might have waited for a while, but it finally combined these segments.

Nissan Ariya was a concept car shown by the Japanese car-maker in 2019 at the Tokyo Motor Show and translated into a production vehicle in the following year. The series version looked almost the same as the concept car.

The Ariya looked like it came from the future with its 24 LED lamps in the front for the headlights and the boomerang-style LED daytime running lights. The prominent black grille was a panel, but the apron's lower opening was used to cool the batteries and the motor. The SUV-coupe stance and the raked C-pillars made a good impression. It looked alive. A roof-spoiler was added to the back to enhance the look, if not the aerodynamic.

Inside, the Ariya didn't share its parts with other products from its lineup. Two wide screens on the dashboard were used for the instrument panel and the infotainment system. There were touch-buttons with a haptic response on the wood-like trim that crossed the dashboard, but the volume knob for the sound system was regular. A voice recognition system similar to Amazon's Alexa was installed, and the updates for the system were made over the air, not requiring a visit to the dealer. The car featured a small gear selector and the touch-buttons for the drive mode on the center console. There was room for up to five adults, with a flat floor in the back.

The Ariya was offered in a few versions for the powertrain, all-electric, with either rear or all-wheel-drive. There were a few options for the battery packs as well. 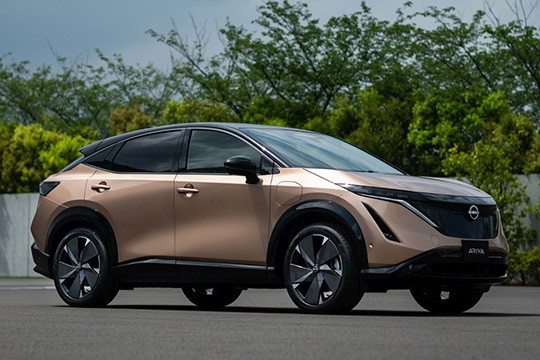