5 Morgan Drives Into 2022 on Three Wheels, Meet the Morgan Super 3

Morgan introduced a new model lineup for the 2022 model year with the Plus Six and Plus Four and managed to continue its 112 years of legacy as a British car manufacturer.

While some automakers bragged about their annual sales, Morgan took pride in itself as the oldest British brand still owned by a British company. Yet, it needed support from other carmakers to make new models. While it worked closely with Ford in the past, later models were powered by BMW engines and German ZF gearboxes.

With the Plus Four model, Morgan tried to offer a lower-powered car than the Plus Six. It was also less expensive, but the overall design was similar to its sibling. Unlike the Plus Six, the Plus Four featured just two headlights mounted on the front fenders. Instead, the car's timeless look featured a curved grille with vertical slats followed by a slightly ascending hood toward the flat, tilted windshield. The valanced, long front fenders were followed by side sills, extended all the way to the rear, slimmer quarter panels.

Inside, the cabin boasted bolstered seats and premium materials. In addition, the 2022 model boasted a Sennheiser sound system with speakers incorporated inside the door cards. Morgan used the old and effective grab-handles solution to close the tiny doors. The steering wheel looked very similar to the ones installed in MINI vehicles, a brand owned by BMW. A novelty for the car manufacturer was introducing a color display in front of the driver in the instrument panel. Two additional dials for the speedometer and tachometer were mounted on the dashboard above the center stack.

Under the hood, Morgan installed a turbocharged inline-four carried over from BMW. Power went to the rear wheels via a six-speed manual. 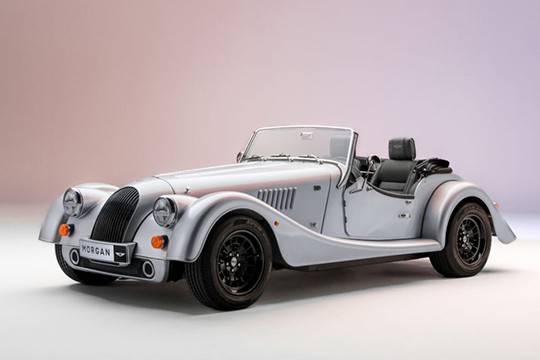