Besides the sedan, MG also produced a five-door version for the 2002 ZS, which was dubbed hatchback.

By 2002, MG-Rover Group got rid of the BMW and considered itself happy with the products it had on the lineup. Moreover, it had a very good platform since the British carmaker was in the hoot with Honda.

While the sedan was most likely a sporty-looking, compact-sized sedan with enough doors and looks to attract colleagues in the high school, the five-door version was somehow an upgraded version for it. It featured the same front fascia with the tuning-like headlights and front bumper. Worth noticing the front split-grille, which was not a leftover effect from BMW, but an MG-original element from the '50s. At the back, the tailgate was adorned by a stylish wing. Unfortunately, the exhaust looked too bland for a vehicle that tried to look cool right from the assembly lines.

Inside, the buttons, the dashboard, and the instrument cluster layout resembled those installed in a sixth-generation European Civic. Yet, the white dials with red needles and the three-spoke steering wheel with the red MG badge in the middle added some flair. Moreover, the high-bolstered seats mounted lower on the floor gave a racy spirit to the driver. Something that many British teenagers craved in the early 2000s.

Under the hood, MG used Rover's engines, and that wasn't such a bad thing. Of course, in terms of reliability, they couldn't match the Japanese ones, but it had the advantage of a 2.5-liter V6 that was not installed in any Civic. Moreover, the car also featured a choice of two oil-burners produced by Rover. 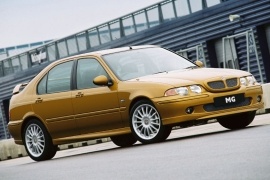