After gaining its independence from Rover and BMW, MG struggled to survive on a competitive market where big guns showed new sporty vehicles addressed for the younger generation, threatening the existence not only of the ZS Sedan on the market but the brand itself.

MG was no longer the shiny brand that once was. It had a platform carried over from a 1991 Honda Civic and a bodywork that it couldn't change without high costs. And it couldn't afford the price. But the British carmaker didn't want to drop the ball and focused on an upgraded version of the ZS range, including the sedan version.

First, it lost all the unnecessary aerodynamic elements that made it look flashy, such as the trunk spoiler or the oversized front bumper. It kept the A-shaped air intake from the front's lower apron and added a pair of fog lights on the sides. The most important change was in the lights department, where a pair of headlights replaced the four-lamp setup from its predecessor.

At the back, the bumper received a black lower area and mimicked a diffuser. It was not, but at least it showed some interest in producing performance vehicles. Last but not least, the carmaker provided the ZS Sedan with a set of multi-spoke light-alloy wheels, fitted as standard or as an option depending on the engine version.

On the interior, the ZS provided the same room as a 1991 Civic Sedan. Unlike its mundane sibling, the British small-sized sedan installed white dials and sporty-looking steering wheels and pedals. Yet, the engines carried over from Rover were Euro4 and, starting with 2005, the Old Continent switched to Euro5 emission levels. That brought the ZS to a halt. 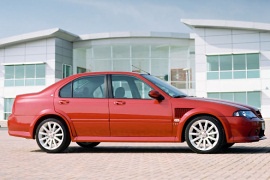