MG started back in the '20s as a tuner for the British brand Morris (MG stands for Morris Garage).

Its original utility on the market was kept and in 2001, the MG showed the sportiest version of the Rover 25. It installed the 1.8-liter K-series engine produced by MG and exploit its potential in the small Rover 25, than rebadge-it and named it MG ZR.

The small hot-hatch featured a 160 hp gasoline engine under the hood and the only transmission available was a 5-speed gearbox. The suspension was stiffened and a new sport interior was installed. In the end, the overall look was a pocket-rocket.

The white background for the dials in the instrument cluster was something that not many car manufacturers dared to do. The bolstered seats were good in supporting the driver and its side passenger in place when hard cornering. The rear seats were designed for two seats only, but under the nice upholstery, it was just the same bench-seat from the Rover 25. The pedals were aluminum in a racing spirit.

On the outside, the 17” light-alloy wheels stood out of the crowd. A rear roof spoiler and a bigger front bumper were included in the aerodynamic package. So, the final look was aggressive and the performance was good for a hot-hatch from that time. But it didn't last long. 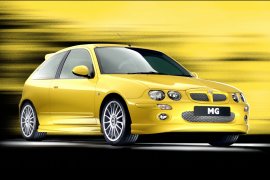