The MG 6 was a small hatchback built by the British brand owned by the Chinese company SAIC.

It was built on an older platform and but with a new design for the bodywork.

When the Chinese company SAIC bought the Rover car company, it bought the rights for the MG brand, but not for the Rover brand. But it didn't matter for them. It used the name Rowe for some vehicles instead of Rover but the MG was kept as it was, with the same logo in the front.

The MG 6 design looked like it was made on fast forward and the designers didn't have enough time to develop a car adapted for the British taste. The front fascia was almost covered with only a narrow opening in the grille to cool the engine. There was a bigger honeycomb grille in the lower part of the bumper. The headlights had an odd shape for that era. Some parts from the bodywork showed inspiration from the former Rover 75 design.

Inside, the car featured a roomy interior for its class, but the thin front seats and the plain dashboard were not very pleasant. The car was fitted as standard with an in-dash navigation system placed in line with the instrument cluster, a climate control panel on the center stack, and power windows for all four. But the materials used were of poor quality. The good thing was that it featured a large trunk and split-folding rear bench backseat.

The MG 6 was offered with a choice of two engines: 1.8-liter turbocharged gasoline and a 1.9-liter turbocharged diesel from Fiat. Both were mated to a standard 5-speed manual, which, by 2010 standards, was a gear too short. No automatic gearbox was available. 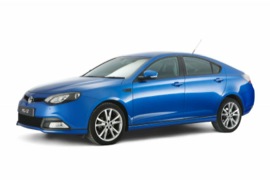