It was launched at the Shanghai Auto Motor Show in 2016 and, in the same year, it was shown at the London Motor Show, marking the sales start.

It was an instant hit for the British market. The new SUV from MG came with two modern engines and with a look that resembled the traditional sporty image of the MG brand.

Even though that the production is made in China, the chief-designer for the MG GS is a British car-designer. The GS took some of the older MG model's look as an inspiration theme. This made the car look British, but in a modern way. The compact-size SUV is built with all-wheel-drive or front-wheel-drive, but for UK it is available only with FWD.

MG offers 1.5-liter and a 2.0-liter engines. Both use gasoline and are developed with General Motors and Opel, and both are turbocharged with direct injection. The engines offers 170 hp and 220 hp, making the compact SUV nimble enough.

As for the inside, the MG doesn't offer too many options, except for two types of leather and a basic infotainment unit. The bluetooth is offered only starting with the middle trim level. The MG GS is available with either a 6-speed manual transmission or a 7-speed dual-clutch transmission. 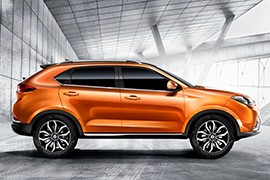