After the failure of the Mercedes-Benz Citan, the German carmaker waited a few years before making a comeback in that segment with the introduction of the 2022 T-Class.

Mercedes-Benz didn't know how to build front-wheel driven cars, so it cut a deal with the Renault-Nissan Alliance and created a new range of vehicles. It was a fruitful experience, and the A-Class received French-built engines while Nissan and Renault-Nissan got the seven-speed automatic gearbox from the German carmaker. But that was only a part of the deal. Renault built the Mercedes-Benz Citan as a badge-engineered Renault Kangoo. Sadly for the three-pointed-star brand, their LCV was sold in low numbers. But they tried again in 2022 and launched the T-Class, also based on the same platform as the Kangoo.

It took Mercedes-Benz two years to create a new front fascia for the Kangoo, but it made it right. The headlights followed the same shape as the rest of the carmaker's products, resembling those installed on the A-Class, C-Class, and others. They flanked a broad grille with three horizontal slats and the company's badge in the middle. On the apron, the wide lower grille sported a pair of foglights as an option. From its sides, the two-box bodywork featured two sliding doors for the rear passengers, while the front ones were regular. Since the T-Class and its French sibling, the Kangoo, were developed as LCVs, they featured a flat rear end with a tailgate or two-section door as an option.

The interior, on the other hand, is crafted with Mercedes-Benz quality and features ARTICO man-made leather for both T-Class trim levels. An MBUX infotainment system with a 7" touchscreen was placed atop the center stack.

Under the hood, the carmaker installed Renault-sourced engines, either gasoline or diesel. All versions were turbocharged and with direct injection. 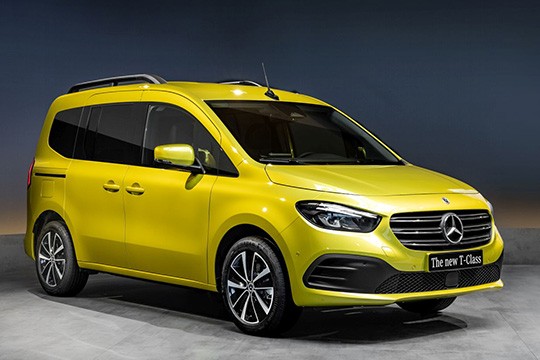