For those who didn't really want the hard-core version of the CLA 45 Coupe, the German automaker had made the 35, which still posted an under five seconds 0 to 62 mph (0-100 kph) time.

Introduced in January 2023 for the 2024 model year, the facelifted version of the Mercedes-AMG CLA 35 Coupe came with a few improvements on the exterior, interior, and under the hood. Even though it was powered by the same turbocharged powerplant as its non-facelifted sibling, it was helped by a belt-driven starter generator.

The car came fitted with a similar-looking Panamericana grille like its more powerful sibling, the 45 S 4Matic+. Mercedes-AMG made just small changes between these models, with the lesser-powered sibling featuring fewer add-ons on the bumper and sides. A significant difference was on the wheels, where the lesser-powered sibling sported ten-spoke, 18" light-alloy wheels, whereas the 45 S 4Matic+ came fitted with a set of five-spoke 19" ones. Just like the rest of the CLA range, whether we're talking about Mercedes-Benz or the Mercedes-AMG, all of them came with new and improved LED headlights.

Inside, the AMG 35 received new colors for the upholstery with either gray-black or red-black combinations. The sports seats with high-bolstered areas were also offered in the standard package, and so were the two 10.25" screens that adorned the top of the dash, where one was used for the instrument panel and the other for the infotainment system.

Under the hood, beside the belt-driven starter-generator, stood the same transversely-mounted inline-four turbocharged powerplant that sent the power in all corners via a new AMG SPEEDSHIFT DCT 8G automatic (dual-clutch) gearbox. Thus, it shaved .1 of a second when compared o its predecessor, reaching the first 100 kph (62 mph) from dead still in 4.8 seconds. 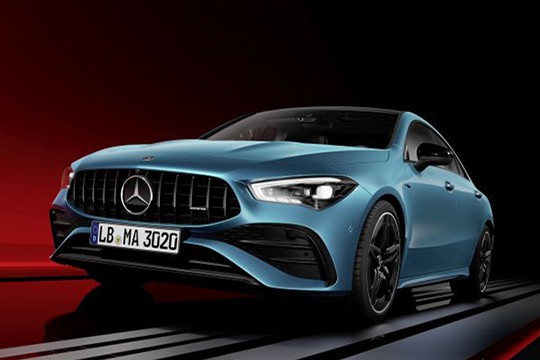