Mercedes-AMG accelerated its way towards electrification and introduced the C63 S E Performance in both shapes, sedan and station wagon, in the autumn of 2022.

The path to electrification challenged the carmakers, resulting in more fuel-efficient vehicles. However, Mercedes-AMG had a different problem: it had to make them more powerful and faster. Since the former C63 was fitted with a mighty bi-turbo, V8, it was a difficult task. And yet, it managed to find a way.

The C63 S E Performance received a slightly different front fascia than its lesser-powered C43. It still features the same grille with vertical slats, but on the lower side of the bumper, there was a different grille with big side scoops, which were all functional. In addition, on the hood, the C63 S E Performance features an exhaust vent, which was never done before on a C-Class. For better road-holding, the front track was slightly enlarged, so the automaker had to install new fenders on which it added fake exhausts behind the wheel arches. Finally, AMG installed a new diffuser below the rear bumper and added a standard lip spoiler on top of the trunk.

Inside, AMG placed a new set of sports seats available in a few colors. Even though it offered an option for carbon-fiber trims on the dashboard and the center console, that was not provided for the seats. The steering wheel was fitted with two buttons on the lower side that adjusted the suspension and altered the drive programs from street to race.

But the big surprise was under the hood where, instead of a massive V8, there was a peepy turbocharged inline-four. Moreover, it was helped by a 205-hp electric mounted on top of the rear axle. The latter was fueled by a 6.1 kWh battery placed above it. The total output was sent in all corners by an AMG SPEEDSHIFT multi-plate clutch gearbox with nine speeds. 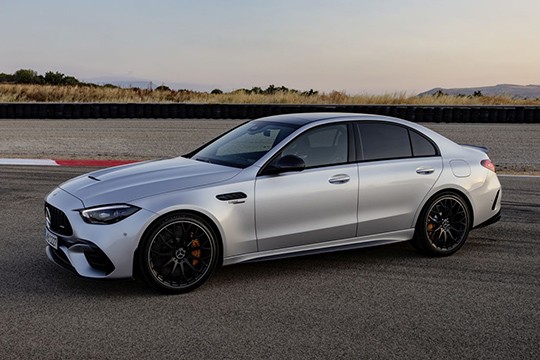