The German automaker introduced the first generation of the CLA 45 S4Matic+ in 2019 as the top-of-the-range version of the compact four-door coupe built by Mercedes-AMG.

Come 2023, Mercedes-AMG launched the facelifted version of the sporty sedan, and besides refreshing the vehicle's exterior, it also updated the interior and the underpinnings. Thus, the AMG CLA 45 S 4Matic+ became faster.

Mercedes-AMG didn't have enough with that Panamericana grille that was showcased on many of its models. After all, it had already become a signature for the automaker, so it installed it on the facelifted version of the CLA. But since it shared its LED headlights with the regular Mercedes-Benz CLA, it had to slightly alter the front bumper's shape. At the back, under the bumper, the automaker kept the four-exhaust system from its predecessor.

Inside the cabin, just like the rest of the CLA range produced by Mercedes-Benz, the AMG sibling offered a luxurious yet sporty ambiance. Fronting the driver was a 10.25" display for the instrument panel, and was continued on the side, above the center stack, by a similarly sized touchscreen. Unfortunately, like on the non-facelifted version, the rear bench was profiled for two, and the headroom could have been better. 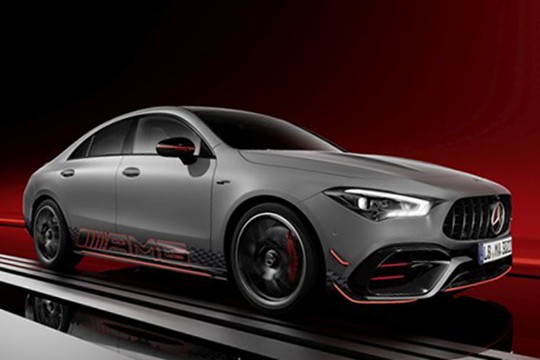