Maserati refreshed the cabriolet version of the GranTurismo model in 2017 for the 2018 model year and added some fresh ideas and lines to the already stunning open-top grand tourer.

The Italian carmaker launched the GranTurismo back in 2007. Yet, it took it almost another three years to reveal the open-top version named GranCabrio at the Frankfurt Motor Show in 2009. Come 2017, Maserati refreshed the range with a facelift for both versions, even though it was about time to replace them with a new generation.

Since Pininfarina penned the vehicle, it was rather difficult to improve the design. And yet, the carmaker had to do that to comply with newer pedestrian protection regulations. Thus, the front bumper received a longer lip on the bottom, while the side air-intakes were enlarged. The Maserati-specific octagonal grille sported black vertical slats that supported the carmaker badge. Thanks to the aerodynamic enhancements, the drag coefficient was improved from 0.35 to 0.33.

Inside, the carmaker offered four seats wrapped in Poltrona Frau leather with integrated headrests. On the center stack, Maserati added a 4” with an option for an 8.4” touchscreen that offered Apple CarPlay and Android Auto connectivity. Moreover, the sound system provided by Harman Kardon was fitted as standard. The infotainment system also provided the climate and seat heating controls, thus reducing the number of buttons that previously cluttered the cabin.

Under the hood, Maserati relied on the Ferrari-sourced 4.7-liter naturally aspirated V8 that pumped out 460 PS (453 hp). It was mated as standard to a six-speed automatic gearbox provided by ZF. 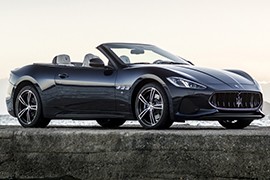