Lincoln also made a decisive move towards the electrification of its range when it launched the Corsair back in 2019 and strengthened its position furthermore when it unveiled the facelifted version in late 2022.

While the regular Corsair was offered as a gasoline-only affair, the GT version was a more evolved PHEV deal that made it more appealing to its customers. In addition, this version received specific upgrades and features that were not available for the regular Corsair.

When the carmaker upgraded the mid-size SUV, it considered that the PHEV version should sport different details. Thus, the Corsair name that appeared on the vehicle was blue instead of plain chromed ones like on the regular version. Moreover, the front fascia also featured a blue-shaded Lincoln badge on the broad grille. In addition, the GT was available with unique-looking 20" two-tone light-alloy wheels.

Inside, the carmaker introduced a new set of seats that provided a more comfortable ride for passengers. Atop the center stack, Lincoln placed a 13.2" touch-screen display for the infotainment system that featured wireless Android Auto and Apple CarPlay. Above the passengers, a panoramic glass roof was available as an option, and it could've been opened to allow more fresh air into the cabin. Lincoln also provided more safety features fitted as standard, such as the lane-keep assist and the automatic lane change when the driver activates the turn signals.

Under the hood, the facelifted version of the 2023 Corsair GT carried over the same 2.5-liter Atkinson-cycle powerplant from its predecessor. Unlike the regular Corsair, this one was exclusively available with an all-wheel drive system. 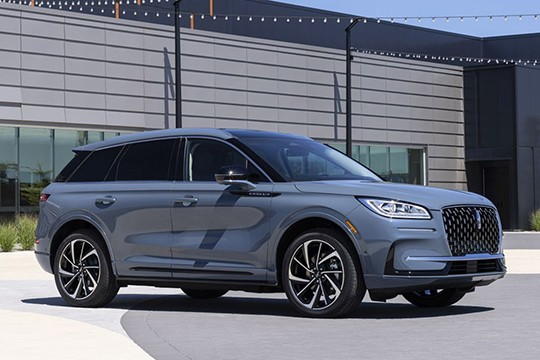