Lincoln introduced a facelifted version for its mid-sized SUV lineup, the Corsair, and offered similar amenities as in its bigger sibling, the Navigator.

Based on the same platform as the Ford Kuga, the 2023 Corsair came on the market in late 2022 with essential updates on most aspects. Moreover, it started to show that finally, the American brand found an intelligent direction for the Corsair.

With similar external dimensions, albeit a little longer, the 2023 Corsair sported a new front fascia that received a broader grille adorned with a 3D pattern. In addition, a keen eye for details could've spotted the small Lincoln badge shapes on that grille. The new LED headlights incorporated the Lincoln name inside them, and lower on the bumper, the carmaker placed the blinkers. From its profile, depending on the options, the carmaker added many piano-black finishes on the door mirrors, pillars, and even wheels.

Inside, the carmaker introduced a new set of seats that provided a more comfortable ride for passengers. Atop the center stack, Lincoln placed a 13.2" touch-screen display for the infotainment system that featured wireless Android Auto and Apple CarPlay. Above the passengers, a panoramic glass roof was available as an option, and it could've been opened to allow more fresh air into the cabin.

Under the hood, Lincoln followed the downsizing trend dropping the former 2.3-liter turbocharged powerplant with a smaller, 2.0-liter unit that was also turbocharged. Like its non-facelifted version, though, the 2023 Corsair was available with either a front- or an all-wheel drive system. 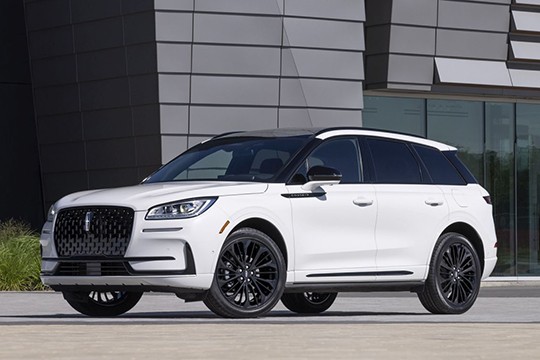