In 2006, the Italian carmaker introduced a facelift for its smallest vehicle in the stable, the Ypsilon.

It sold it under the Chrysler badge in the U.K. and as a Lancia in Europe.

Based on the Fiat Punto platform, the Ypsilon tried to be a fashion item more than a regular, city-segment hatchback. But the Italians couldn't transform the little Lancia into the same phenomenon as the Fiat 500, despite their efforts to hire high-profile movie stars in promoting it.

With a sportier look, the Ypsilon tried appealing to the company's former glorious racing heritage. At the front, the lower bumper area received a trapezoidal grille with two side scoops for the fog lights, while the grille received a new mesh-grille pattern. Its headlights sported a minor change at their top, on the turn-signal area. In the back, the carmaker installed new taillights with clear lenses instead of the older red ones, plus a bumper with two small reflecting red strips.

Inside, the carmaker introduced a new center stack and a new infotainment system. It featured a touch-screen display for the navigation system. Depending on the option and engine, the Ypsilon's instrument cluster sported one or two gauges, apart from the LCD screen mounted on top of the panel.

Under the hood, Fiat kept the same gasoline engines but improved the diesel version. The carmaker introduced an automated five-speed gearbox to match the customer's requests and advertised it as an automatic. 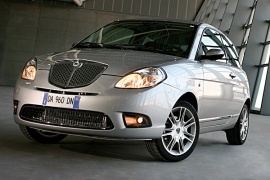