Based on the same platform as the Alfa Romeo 164 and the Saab 9000, the Lancia Thema was the most luxurious model in Lancia's lineup.

By the end of the '80s, Lancia was on the verge. In 1984, the Italian carmaker introduced the Thema as the up-market representative. It was the first vehicle built on the Fiat/Saab platform, and it replaced the unsuccessful Lancia Gamma.

The refreshed version featured a new set of narrow headlights and a sharp-looking grille. Its subtle turn-signals placed just above the bumper were hard to be noticed at night, but they were as legal as they could. The Italians didn't want to spoil the look for regulation's sake! In the rear, the taillights were mounted only at the back of the quarter panels. The top version, named 8.32, featured a retractable wing activated via a button inside the cabin.

Depending on the trim level, the Thema could have offered a simple interior or a luxurious one. From regular cloth to expensive leather, Lancia could offer almost any kind of upholstery. While the base models featured black plastic trims, the upper trim levels featured wood-trim on the dash and door panels. Like the rest of the vehicles built on that platform, Thema offered a decent amount of room in the back for up to three occupants, although the high center tunnel was too intrusive for the middle passenger.

Lancia offered the Thema with a wide choice of engines. After 1988, it installed twin-cam engines with four valves per cylinder. There were a few special versions, such as the Turbo with all-wheel-drive and the top model 8.32. The latter used a Ferrari 308 GTB engine and could keep up with most of the supercars from its era. It was a genuine factory sleeper. 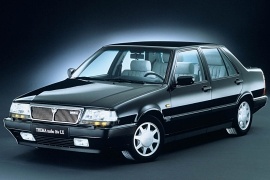