There is no doubt that the Lancia Stratos was one of the most fantastic cars ever made and won the World Rally Championship back-to-back three times between 1974 and 1976.

Lancia designed the car to win rallies, and it did a fantastic job. Bertone Studios signed the initial concept and showcased it at the 1971 Turin Motor Show under the Stratos Zero name. The Italian carmaker used the engine from a Ferrari Dino (which didn't sport the Ferrari badge, by the way). Fiat built the 500 powerplants needed to get the FIA homologation.

Racing necessities dictated the strange look of the car. At the front, it featured pop-up headlights to improve the aerodynamic. Its unique-shaped windshield had a constant radius to reduce distortion. Even if it looked thick, the B-pillars were thinner, but the engine compartment's lid extended it. Lancia chose to install a massive rear cover that opened with the rear fenders and the back panel. From behind, a set of round taillights carried over from the Dino completed the design of the short Stratos.

Lancia built the Stratos' interior around Sandro Munari, its main rally-driver, who was 5.8' (1.76m). Like any race-built vehicle, the Stratos HF Stradale offered minimal interior room, but it had some unusual features. The door's shape allowed the carmaker to install huge pockets inside them, so the driver and its co-driver could place their helmets. The side windows were fixed but featured a sliding area for some ventilation.

Lancia installed a 2.4-liter V-6 engine behind the cockpit and paired it to a five-speed manual gearbox. The street-clothing version provided 190 hp, which was more than enough to propel the 900 kg (1984 lbs) to 60 mph in less than seven seconds. It featured independent suspension in all corners. 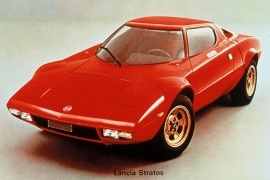 4 See Italy's Most Stubborn Driver in Action, the Car's Clutch Gives Up Before He Does