The new Gallardo Squadra Corse is derived directly from the race car.

Both share the same V10 engine, which is used in the racing version with no modifications. Likewise, the Squadra Corse has the same rear wing for greater aerodynamic load - achieving, under the best aerodynamic conditions, three times the load of the Gallardo LP 560-4 - for increased dynamic stability during tight high-speed cornering. Another element taken directly from the racing version is the removable engine hood equipped with a quick-release system. Both the rear wing and the hood are made from carbon composite material, as are a host of other components on the Squadra Corse. 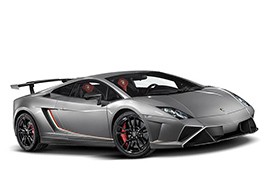