Unveiled at the 2019 Los Angeles Auto Show, the Karma Revero GTS is a performance version of the Revero GT, which is itself a heavily revised and renamed version of the ill-fated Fisker Karma.

Thanks to a number of performance upgrades, the Revero GTS has a 0 to 60 mph acceleration time of just 3.9 seconds, which is quite a feat especially alongside features like the two electric motors and electronic torque vectoring on all four wheels.

Since it is based on the Revero GT, the GTS version is largely identical from a technical standpoint, with the dual electric motors being supplemented by a turbocharged three-cylinder internal combustion engine, which was sourced from BMW and acts like an on-board electric generator. The car's total driving range is up to 360 miles on a single charge a one gas tank, with up to 80 miles of emission-free all-electric driving with the juice from a 28 kWh NMC (Nickel Manganese Cobalt) lithium-ion battery. Despite its accelerative performance, the model is electronically limited to 130 mph, but would probably do a lot more if unrestricted and with different gearing. Karma Revero GTS drivers can select from three different driving modes, which can either transform the car into a pure EV, turn on the ICE generator to preserve the battery charge or combine the output from both the battery and the generator for maximum performance. 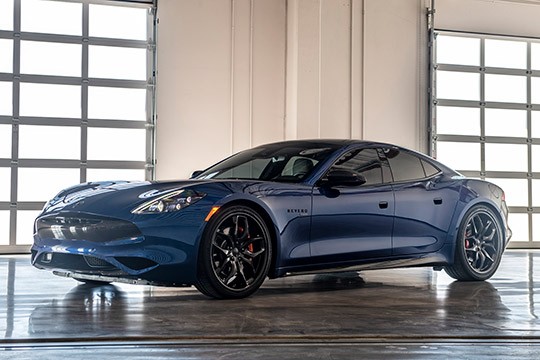 4 Karma E-Flex Van May Not Look Like It, But It Has Some Revero GT Genes in There