The Infiniti QX70 was more about style, luxury and comfort rather than practicality.

Based on the Q50’s platform, the luxurious crossover handled much like a sporty sedan, and only few crossovers on the market could match the QX70’s performance.

The Nissan’s upmarket brand refreshed the crossover for 2014 and the QX70 was offered in two main trim levels: the V6 and the V8.

Featuring lots of modern and luxurious features, the QX70 came with a reverse parking camera, heated and cooled seats, impressive storage spaces inside the cabin with 2 cupholders, a large glovebox and good-sized door bins and many others.

While the crossover was offered only with two trim levels, most options were bundled into packages such as the Premium, Deluxe Touring and Technology package. The packages’ scheme was a little complicated, depending on the trim level and the already added packages that granted other options to be added.

Fitted with an all-wheel-drive system that was standard on the V8 and optional with the V6, the QX70 was a reliable car during winter times.

The QX70 offered a responsive steering, however, the ride was a little firm, thus it didn’t suit everybody’s taste.

Practicality-wise, the rear cabin offered enough legroom, but headroom was limited. Also, the central transmission tunnel made an unusable 3rd seat, at least not for adults. 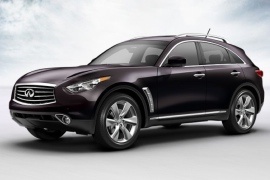 3 Infiniti Puts the Kibosh on the Q60