Infiniti ditched the G-series sedan and replaced it with the Q50 in 2013, introducing a new naming system in its lineup.

Based on the same FM platform shared with the Z-series and the EX/QX/FX models, the Q50 was the equivalent of the Japanese Nissan Skyline. It heralded a new era in Nissan's lineup and tried to steer emotions, convincing the customers that an Infinity can be bold, sporty, and elegant at the same time. Last but not least, it shared some of its technology with Mercedes-Benz.

From the design point of view, the sharp angles and lines emerged from the front of the car onto the profile, on the sculptured doors, and reached the rear quarter panels. Its eye-like swept-back headlights sported an LED line on the upper side. From its sides, the Q50 showed a cab-rearward design with a short deck at the back and a raked-froward rear windscreen. At the back, two horizontal chromed trims emphasized the car's width. The upper one linked the rear LED taillights on the trunk.

The interior revealed a luxurious cabin with a pair of bolstered front seats separated by a tall center console. On the upper side of the center stack, Nissan installed a touch-screen infotainment system that combined more functions than on the previous G-models. A secondary touch-screen sported the climate control functions, thus limiting the number of physical buttons on the center stack. At the back, the bench was fit for two adult passengers, separated by a tall center tunnel that limited the legroom for a third one.

Under the hood, Nissan installed a choice of gasoline, diesel, and hybrid powertrains. The 2.2-liter units were carried over from Mercedes-Benz and were not available on the U.S. market. 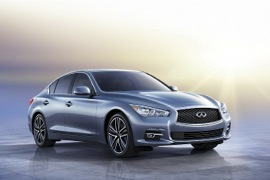