Hyundai's flagship SUV, the Palisade, received an upgrade in 2022 and improved the vehicle both on the inside and the outside.

When Hyundai unveiled the Palisade at the 2018 Los Angeles Auto Show, it offered a feasible alternative to other premium SUVs, at least in terms of features and amenities. But the carmaker didn't stop, and in the first half of 2022, it released a facelifted version, which came with improvements in most areas. Yet, the overall shape was still the same.

At the front, the grille was wider and sported a cascading design, as they put it. However, its five horizontal slats and the chromed elements that adorned the front fascia, and the reshaped vertical headlights offered more of an Escalade-like appearance. At the back, the bumper got a new design, with a red stripe crossing it from left to right, above the silver-painted underbody shield.

Inside, Hyundai stepped up its game, and the third row offered heating for passengers, a first for the Korean carmaker. Moreover, the second row provided heated and ventilated seats for enhanced comfort. But the carmaker didn't focus only on comfort but also enhanced the safety by offering nine airbags fitted as standard, as compared to seven for its predecessor.

Under the hood, Hyundai installed the same 3.8-liter V6 engine that ran in Atkinson Cycle mode for improved fuel efficiency and was paired to the same eight-speed automatic gearbox. Unlike its predecessor, though, it provided a Tow Mode for the electronically controlled all-wheel drive system. 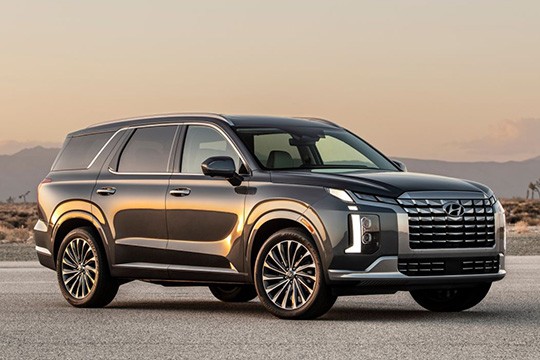