When we say Honda, we usually think about reliable, durable family cars, right?

Then if we think about it, Accura and the Type R Accord were also developed by Honda. Honda didn’t disappoint when they released sporty models, and the S2000 was one of them.

The concept car was first shown to the public in 1995 at the Tokyo Motor Show. 4 year laters, the S2000, a 2-seater designed to be a true performance roadster using racing derived technology.

The S2000 had a 2.0liter 4-cylinder engine developing 240 hp, with the engine revving up to 9000rpm. With the powerplant mounted behind the front axle, the sports car had an optimum 50:50 weight distribution, thus handling and turns were a real pleasure.

The engine was mate to a 6-speed manual transmission that was specifically designed for the Honda S2000, with smooth rapid changes.

The S2000 was equipped with their new generation of electrically assisted power steering that gave an excellent road feel and minimised energy loses altogether.

The stiff suspension on the S2000 was a double wishbone for both front and rear and offered great stability on the road.

The body of the Honda S2000 was made of a rigid X-one monocoque chassis.

A second generation of the S2000 released in 1999 was shown to the public and came with a bigger 2.2-liter engine. 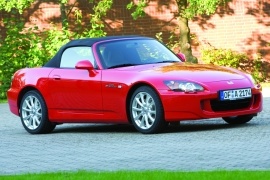