The Honda del Sol was based on the Honda Civic platform, being a 2-door coupe version of the popular Civic when it comes to the technical side.

The 2-seater debuted in 1992 in the United States and the United Kingdom. The nameplate “del Sol” come from its opening roof, “del Sol” meaning “of the sun”.

The car’s shape competed head on with the Toyota MR2 and the Mazda MX5. The Del Sol was available either with a manual targa roof or an electrically operated targa roof. The electric one was not the most recommended as it used around 5 systems simultaneously and one of them could break down. The trim levels available in the U.S. were the S (base model) and Si. The S had a 1.5-liter 4-cylinder engine, while the Si had a 1.6-liter 4-cylinder engine that made the Del Sol take around 8 seconds to sprint from 0 to 60 mph.

The most notable version of the CRX was the one produced for Japan – the CRX Del Sol SiR – also a 2-door roadster with a hard-top body. The SiR had a 4-cylinder with 1595 cc of displacement, producing 168 hp. The car would get from 0 to 100 kph (62 mph) in 7.5 seconds. The CRX was unveiled in Japan and Europe in 1992 and later reached the American Market. The vehicles were produced in Honda’s Suzuka plant in Japan. 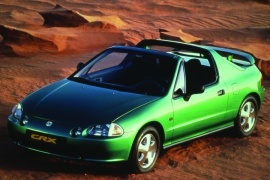