Even though it wasn't too much since the tenth generation of the Honda Civic was launched, the Japanese car-maker introduced a facelift for it in 2018.

For the tenth generation, Honda used turbocharged and naturally aspirated engines, depending on the trim level. The design of the 2019 sedan, coupe, and hatchback was slightly revised along with a better-equipped interior. The 2019 Civic sedan was available in the U.S. in five trim levels, but that number decreased on the European models.

For the front side, the bumper was redesigned along with a new pair of headlights. For the Touring trim level, the LED headlights were upgraded to a new design to give the lights a wider and longer high-beam. In the back, there was a different bumper and a single, wide and flat, central exhaust.

Inside, the most important feature for the users was the volume knob, instead of a touch-slider that was annoying and difficult to use. The Civic also packed the safety system named Honda Sensing that helped the driver in keeping lanes and distances, plus the adaptive cruise control.

Under the hood, the 2019 model received a standard 2.0-liter naturally aspirated engine mated as standard with a 6-speed manual, or with a CVT that was an option. The 1.5-liter turbocharged unit was more powerful and for almost all the trim level it was mated as standard with a CVT and only on the base trim level transferred its torque via a 6-speed manual. 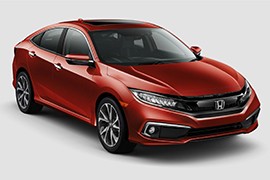