Honda took a new path and left behind the fourth generation's wedge-style and brought a new era with a biodesign-inspired shape for the 1991 model.

Unlike its predecessors, Honda insisted on offering the Civic with market-specific body shapes. The only version which was available in every market was the four-door sedan. Due to its increased wheelbase and its options, it looked like it aimed for higher market segments.

Honda designers decided that it was time for a change, and with the new, rounded edges and flowing body lines, they achieved a 0.32 drag-coefficient, similar to a Nissan 300ZX. The raked windshield and the sloped rear window contributed to that result. Since it was built on the same platform as the hatchback and the coupe, it featured a short decklid, creating a cab-forward design look.

The interior was plain, with gray trims on the dash and door panels. Honda insisted on having sporty handling, even if it was just a regular family vehicle. To do that, the engineers installed lower seats. It didn't feature any folding seatback for the rear bench.

Unlike most of its competitors, the Civic sedan featured independent suspension in all corners for enhanced speed cornering and a comfortable ride. Under the hood, there was something for everyone. While the base version featured a 90 hp unit, the top version was powered by the well-known 1.6-liter VTEC engine that provided 160 hp. 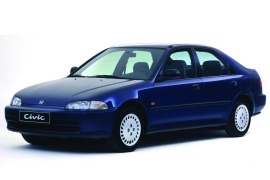