Honda refreshed the tenth-generation Civic lineup in 2019, just two years after the model's introduction on the market, and besides fixing some technical issues, it added some changes.

The car looked like it had gone through a tuning shop right from the start, even though it was completely stock. But Honda went even further when it refreshed the car in 2019 for the 2020 model-year, a year marked by the world pandemic with several production halts and logistics issues.

At the front, the car received new body-colored slats in the foglights clusters and an updated "wing" cross-bar. In addition, its headlights received a blackout treatment, while the Sport Touring trim level added LED headlights. Moreover, the door mirrors sported a black lower part. Last but not least, the carmaker added new options for the light-alloy wheels.

Inside, the most significant change was the return of the volume turning knob. Its users criticized the car since the 2017 model-year featured only a touch scale for adjusting the volume. Moreover, the infotainment unit was upgraded with Android Auto and Apple CarPlay integration. Honda noticed that the customers were concerned about sound quality. So, even though it had to add some weight, it added more sound-deadening materials on the floor, trunk, and wheel fenders. The vehicles fitted with a dual-zone climate control received physical buttons for fan speed.

For the drivetrain, Honda kept the same 1.5-liter turbocharged gasoline engines and offered a six-speed manual for the Sport Touring trim level. Starting with the 2020 model-year, the carmaker said that it fixed the oil-dilution problem that affected many cars built before. Last but not least, the electric parking brake received an indicator light. 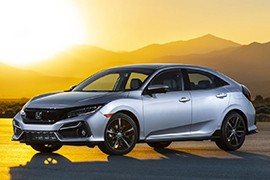