The 2008 GMC Sierra came on the market during the world financial crisis's harsh times in three body shapes, and the most convenient dual-use vehicle was the 1500 Crew Cab.

GMC was no rookie on the pickup game since it built vehicles for over a century and its specialty was on the utility-vehicles segment. The Sierra was already on its third generation, and thanks to its crew-cab version, it was a good choice for those who needed a truck for work and an outdoor vehicle for the weekend with their families. It was built on the T900 platform, which proved to be much better than the one it replaced it.

Like its predecessor, the Sierra was available in a few body versions, starting with a chassis-cab and going up to the big crew-cab version. Its raked windshield at 57 degrees decreased the wind noise and the aerodynamic resistance, increasing the fuel-efficiency. To add a more dynamic appearance, the Sierra featured flared wheel-arches. For the Crew Cab version, GMC offered the Sierra with a few bed length options, depending on the owner's needs.

Inside, the Sierra offered room for up to five passengers. Thanks to the new platform, the carmaker was able to build a flatter floor in the rear. That led to an increase in legroom for those sitting on the bench. At the front, the driver and its passenger enjoyed a big dashboard with a flat front side and a center stack for the climate-control unit and the audio/infotainment system, depending on the options. 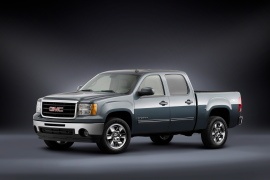