The Savana 3500 was the classic utility van that proved to be successful as an MPV as well.

With room for up to 15 passengers on its extended-wheelbase variant.

The car's origin dated back in 1976 and the basic vehicle remained the same. It was built on a ladder-chassis, with a solid axle in the back and independent front suspension. It featured standard electronic stability control.

The 2013 Savana 3500 was available with a slightly redesigned front fascia. The big headlights were positioned high so they were protected in the event of a minor parking crashes. A big, sliding, door was available on the right side, to ease the access inside the vehicle. Twin-doors on hinges were placed in the rear.

Inside, the Savana 3500 offered room for 15 passengers as standard, with two trim levels: LS and LT. For the front passengers, the former three passengers bench-seat was deleted and only the two individual seats were offered. The classic dashboard was big, high, and flat as in most of the utility vans. But when compared to that, the passenger version had new amenities on it. From the multiple-zone climate control system to the new audio system which includes CD/MP3, a USB port, and navigation system. For the utility van, the 3500 offered 800 lbs (362 kg) of GVWR over the Savana 2500. It could tow up to 10.000 lbs (4535 kg). 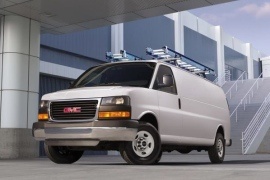