Ford built the ninth generation of the Thunderbird on the same Fox-body platform used for the Mercury Cougar, Ford LTD or Lincoln Continental.

Ever since the beginning of the Thunderbird, Ford worried about overlapping it with the Mustang, and while the pony-car received more powerful engines, the T-Bird got more features making it a personal luxury coupe. Unfortunately, since it didn't want to compete against the Mustang, Ford made the Thunderbird too slow and, despite its sleek design, it didn't make it into the top sales charts.

The exterior was way more improved than its predecessor. Its cab-rearward design with a long hood and a short trunk made it look very dynamic. Thanks to its raked windshield and sloped rear windscreen, it was quite attractive. At the front, the big horizontal headlights improved the car's look. Ford designers installed color-body wrapped-around bumpers both front and rear, with a rubber strip on them. From its sides, the small windows behind the doors brought more light inside the cabin.

Inside, the front bucket seats were designed for comfort. Since it was a personal-luxury vehicle, Ford installed wood-trims on the dash panel, doors and center console. On the center stack, the Thunderbird sported an auto-reverse stereo-cassette player placed lower than the air-conditioning control unit.

Under the hood, the best engine choice was a 2.3-liter turbocharged-four that provided more power than the 3.8-liter V-6 or the 5.0-liter V-8 engines. While the V-units were paired as standard to a sluggish 3-speed automatic transmission, the turbocharged unit was mated to a 5-speed manual. 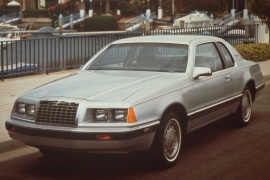