Ford introduced the fourth-generation of the Ranger lineup (fifth including the North-American model) in late 2021, even though its sales across Europe and other countries placed it on the top of its segment.

Ford designed the 2021 Ranger with a strong inspiration from its American sibling F-150 and the Bronco. Its C-shaped daytime running lights surrounded the outer sides of the headlights, which flanked the wide, massive grille. The car featured a small front-view camera under the blue-oval logo mounted a few inches below the hood's edge depending on the trim level. Under the bumper, Ford installed two recovery hooks welded directly onto the chassis. The front fenders sported a vent behind the wheel-wells, allowing the warm air to escape the engine compartment. It was a unique feature in its class.

The carmaker placed a step integrated into the rear bumper at the back, which eased up the bed's access. Unlike in the previous versions, Ford stamped the Ranger nameplate onto the tailgate and integrated the third brake light. Thanks to the repositioning of the rear dampers, the bed was wider between the wheel-arches. It was wide enough to fit a Euro-pallet between them.

Under the hood, Ford announced a two-liter turbodiesel available in two power outputs, or a V6 oil-burner developed with Volkswagen. In addition, a six-speed manual or a ten-speed automatic was available, depending on the version and options. A 2.3-liter EcoBoost gasoline powerplant and a hybrid option were available in specific markets. 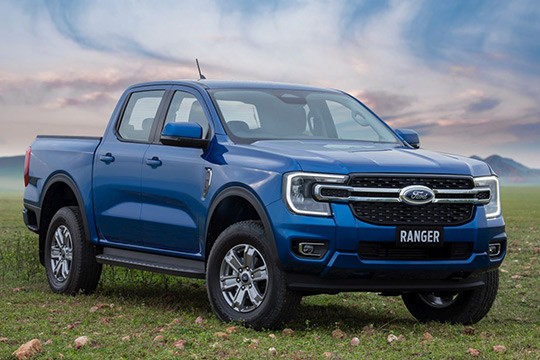