The Mustang was the original pony car, and it was one of the most important nameplates in Ford's heritage, and the 1965 fastback was an inspiration for many generations of car-enthusiasts.

To build the car, the engineering team and designers alike burned the midnight oil and finished the project in just 18 months when there were no computer-aided-design techniques. The result exceeded the expectations since it started a new car-segment.

Joe Oros designed the Mustang sedan with two doors and regular, three-box bodywork. Then, he secretly created the fastback, cast it in fiberglass, and showed it to Iacocca. The Big Chief agreed, and the legend was born. Joe Oros originated from Europe and had different ideas. He wanted the car to have a different stance and a unique front fascia. That's how the Mustang badge appeared on the grille and not the blue-oval. The round headlights were positioned a little bit backward than the grille. As a big difference apart from the regular coupe version, the greenhouse featured a sloped rear window and thick B-pillars with air-vents. Due to its sculptured side panels, the Mustang showed like no other American car on the road. For the 1965 model, Ford installed a specific badge behind the front wheels, on the fenders.

Inside, there were two bucket seats and a four-on-the-floor gear-stick. The instrument cluster resembled the front fascia, with two round dials on the outer sides and a linear speedometer between them and three lamps at the bottom. The car featured another pair of seats in the back, but they were so cramped that they could hardly be taken by anyone else than a toddler in a jumpsuit. 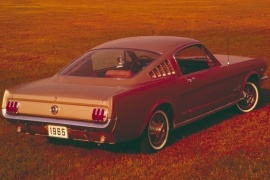