Ford introduced the Mustang in 1964, and Caroll Shelby enhanced it to an incredible level of track performance with the legendary GT350 Competition model.

In 2015, Ford launched a special version of the sixth-generation pony car, named GT350R. It was a car developed for track use but still able to wear license plates on it.

There are several differences between high-performance vehicles and race cars. While the former are mostly good to be fast for short periods of time, the latter can withstand hours of torturing accelerations, brakes, and high-speed cornering on a track. And that was the 2015 Mustang GT350R.

The Mustang already had a few high-performance versions, but this was different, and it was easy to notice some aerodynamic enhancements over the body. At the front, a splitter and a lower lip spoiler helped push down the car at high speeds, while the side skirts featured a step-like design made to create a linear airflow along with the bodywork. The quarter panels hosted wider tires, while on the trunk lid, a taller wing pushed the back of the car even harder on the ground. In addition, a diffuser helped with the ground effect.

Inside, a pair of sports seats with high-bolstering was the only one available. The rear bench was removed to reduce weight. Moreover, most of the sound-deadening materials were gone for the same reason. But Ford still offered an infotainment unit and climate control on the center stack as an option. Above the 8" touchscreen, the carmaker placed two gauges with essential information for the driver. Last but not least, Ford put Shelby's cobra logo on the steering wheel instead of the blue-oval badge.

Under the hood stood a flat-crank V8 engine built to handle well high temperatures and revs for long periods of time. It was mated with a six-speed manual that sent the power to the rear wheels via a limted-slip Torsen differential. 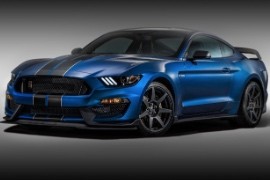