Ford introduced a mid-life cycle refresh for the Fusion in 2016 and brought more than just some new rims, bumpers, and headlights.

While it shared the platform and the shape with the European Ford Mondeo, the Fusion offered more than any of its European siblings could hope for. For the 2017 model year, the carmaker produced the sporty sedan in a complete package that could satisfy the environmentalists or the petrolheads as well.

There were some minor changes on the regular versions from the outside, which included a new bumper and fog lights. The car featured a honeycomb grille at the front with an A-shaped lower apron for the sport version. In the back, for the sport version, Ford installed four exhaust pipes. Ford made a bold move for its family sedan range.

Inside, the carmaker introduced the SYNC3 infotainment system that tried to compete with the rest of the Android-compatible units offered by other carmakers. But the most significant novelty was the rotary gear selector placed on the center console for the entire range. For the hybrid version, the 2017 Fusion offered less trunk space than its siblings, but it showed a significant increase in the car's fuel efficiency, and thanks to the plug-in system, it provided more than 20 miles (32 km) of pure electric range.

The most significant novelty for the drivetrain was the twin-turbocharged V-6 engine. It provided 325 hp and sent the power in all corners. That version placed the Fusion Sport into a completely new category of sport sedans, competing directly with Subarus and other all-wheel-drive vehicles. 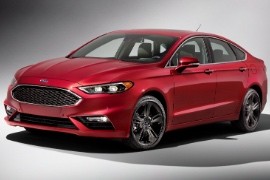