Ford refreshed the fourth generation of the Escape in 2022 for the 2023 model year and improved the car's look, the interior, and most importantly, the drivetrain.

Sharing its platform with the European Ford Kuga or with the Focus' fourth generation, the Escape proved to be a good bet for those looking for a crossover perfectly suitable for the urban environment. Moreover, it managed to be a good companion on long runs, albeit its rather short wheelbase didn't recommend it for cross-continental drives.

Moving to the facelifted version, the Escape offered a redesigned front fascia that featured narrower headlights with angular LED daytime running lights inside. Unlike its predecessor, the 2023 model featured a higher-mounted grille with a wide hexagonal shape and had the blue-oval badge mounted on it instead of on the upper side of the bumper. From its profile, the 2023 Escape didn't change too much, save for the front bumper. Finally, the rear side of the crossover sported redesigned taillights.

Inside, the most significant difference was on the dashboard, which received a new infotainment unit placed atop the center stack. It featured SYNC 4 technology that allowed a cloud-connected navigation system. In addition, it had wireless Apple CarPlay and Android auto smart driving capability.

Ford offered the Escape as a gasoline-only version, a hybrid, or a plug-in hybrid version. 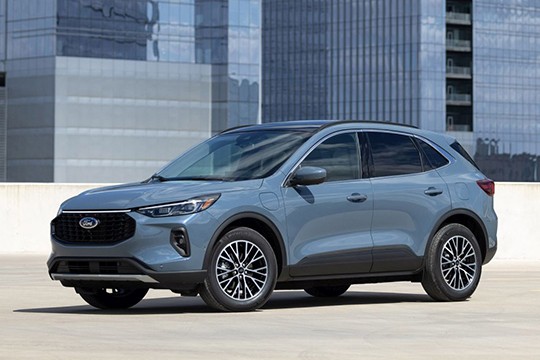