Fiat's history begins way back in the 1899, however, car production stopped altogether with the beginning of World War I.

The 501 was the first entirely new model to be produced after the global conflict ended.

The torpedo served as a base-model for Fiat and the later lineup comprising the Fiat 502, 507, 509 and 520. At that time, it was exactly what people needed: an affordable and fuel-efficient small family car.

In 1919, all European nations were going through a difficult period and industries were facing enormous difficulties in providing a stable production level, compatible with their potential.
In this context, Ford attempted to invade the markets of Europe and Fiat was the first to react with the 501 model. Next came Citroen with the 10 hp type A. The Fiat 501 had a 1460 cc displacement producing 24 hp.

The successful, robust and efficient model was available in a large number of versions.
In 1921, Fiat introduced two new models, the 501 S (sport) and 501 SS (spider sport) – with the same cubic capacity, developing 27 hp, and 30 hp, respectively. All versions had a 4-speed manual transmission. Around 70,000 units were produced and for that time it represented a huge volume. In 1923 Fiat produced a new version of the 501, named the 501C for the armies of the King of Italy. 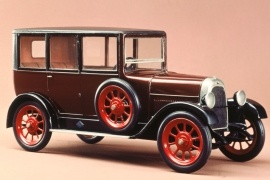