It took some design inspiration from its predecessor, but it offered more interior room and better performances.

The Italian carmaker was still on top of its game, and it was a brand hard to beat by the newcomers such as the BMW or Audi. It offered class, performance, and heritage. It had all the aces. Unlike its competitors, it was available with 5-speed manual gearboxes, which were considered a high-end technical evolution for those times. Some carmakers even placed badges on the trunk-lid with that "5-speed" ability. Just two years after the car's launch, Fiat answered some critics by improving the car. It was the right thing to do, and that served both them and the customers.

Fiat designed the vehicle with slightly curved lines. At the front, the designers installed a dual headlamps system, similar to the one fitted on its predecessor, the 125. A black instead of a chromed grille was introduced for the base trim levels, while the full-options version featured chromed horizontal slats.

Inside, there was room for five adult passengers on comfortable, velour upholstered seats. The transmission tunnel was not that intrusive into the passenger area, but still, the middle occupant from the rear bench had to choose carefully how to sit.

Under the hood, Fiat installed a choice of engines, including the twin-cam unit that was offered previously on the 125. 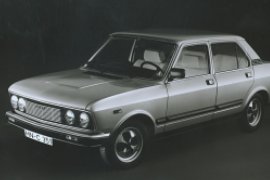