Fiat already started to break the ice in the automotive industry, and its management understood that the key to success is standardization. Ford already proved that in the U.S. with the Model T. But Fiat didn't want just another vehicle. It employed Giovanni Battista Farina to help them in building the bodywork. Later on, Battista incorporated the "Pinin" name in its workshop and became Pininfarina. The carmaker succeeded in building over 2000 units from the Fiat Zero, which was also known as the 12-15 HP. These numbers were related to the tax system, not to the actual engine power.

While the Brevetti was available in more coach versions, the Zero featured only one: an open tourer. The engine compartment was a five-panel construction with rounded edges. On the sides, between the front doors and the wheel-arches, the carmaker installed the spare wheels on both sides. The car featured four doors to ease up the ingress and egress. Its rag-top was completely removable and could be left in the garage or just retracted and stored behind the rear seats.

Since it was an open-top vehicle, Fiat considered fitting the car with leather benches, both front, and rear. Its dash panel was very similar to the one fitted on its predecessor, the Brevetti, with a four-spoke steering wheel and center-mounted instrument panel.

Fiat offered the Zero with a small, 1.9-liter engine. It was paired as standard to a four-speed manual gearbox and sent its power to the rear wheels via a chain. 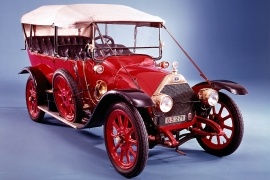